portable is a moment of unity, where through simplicity and timeless  repetition we create a shared language- a diversity in unison.

this work was supported in part by a grant from the National Endowment for the Arts.

call for participants/ performers of all backgrounds
we are interested in a diversity of physical performers, dancers, artists.
portable is a dance that is a celebration of the physical at a meditative pace near Times Square.
conceived and directed by
despina sophia stamos in collaboration with christina andrea and mdas
We will perform “portable” on May 18th from 12:30p to 1:30p and May 19 6:30-7:30 pm.
The modern dance awareness society brings attention to the presence of the human form amid a concrete cavern in Times Square.

portable involves a large cast of dancers that stretch across the stage-a line of bodies between  42nd and 43rd st.  It’s a tapestry of bodies in the process of sharing a sensory oriented state that begins with a mesmerizing, time-shifting unison ritual.The audience has the opportunity to watch from multiple perspectives including a live cam view that is projected on the wall opposite the stage area. Toward the end, they are gently invited to join. The work is a celebration of the uniqueness of the individual, the “ i”, the “1” the essence as it relates to the whole.  It is a living fabric of community made of diverse threads that are a metaphor for our similarities and our individual complexities and differences.

portable is a moment of unity, where through simplicity and timeless  repetition we create a shared language- a diversity in unison.  The participants function as a community where each individual can set, maintain or surpass her/his own limits and boundaries. A mirror of ourselves through the eyes of another, an entrancing and peaceful parade of bodies sharing a common sense, the tactile. Literally, a ritually minimalistic antidote for the modern, competitive, fast-paced society, that daily assaults our deepest sensitivities, cravings and even alters the heart beat of our inner universe.

portable is a reminder, an effort to peel away the excess, the layers of social persona to reveal our own exceptional core that always exists in each one of us. portable ignites a human spark in a concrete environment- a pause in the chaos.
this work was supported in part by a grant from the National Endowment for the Arts.
mdas will be conducting two rehearsal/workshops for portable.  this work begins in a group ritual that evolves for the duration of one hour.
we will be working off a single form/phrase which we will post online before the workshop.
rehearsal/workshop will be scheduled via Doodle calendar after you contact us.
contact- despina at despinasophia@hotmail.com
or call     212-629-0701

Friday May 13th between 2-8 pm and Monday May 16th 12-8pm.
rehearsal/workshop will be held in the space in 2 hour intervals.

repeating the phase tickles these meridian points
heart, pericardium, gallbladder, small and large intestine and lung.
this is the basis of the form/prase.
one point is to energize our depth, by tracing our depth as we roll up and down our spines, each time experiencing the sensation of depth stimulation. 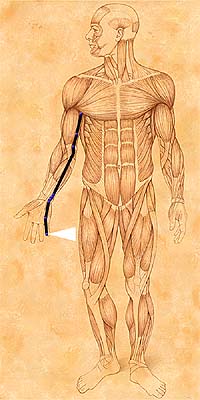 Psychological pressure and stress, such as anger, irritation, feelings of being annoyed  and frustration weaken the flow of the energy in the gallbladder and bile, and also in the liver.

The lung represents the bronchi, the immune system (protection from infections), allergies and the skin. Psychologically it stands for communication problems.

The Lung meridian is the “Master of the Respiration”, therefore its acupuncture points are used for illness of the lung, the respiratory system and the heart. Its eleven points begin in the third intercostal space. The meridian runs on the inside of the arm over the thumb to its terminal point on the exterior of the thumb (In the EAV model this point represents the lymphatic system, which is not in accordance with the meridians as laid down in TCM!).

The lung meridian also represents the oxygen content of the body, is associated with the skin and shows reactions if allergies and heavy metal toxicity are present. The Lung meridian controls the exterior of body and all the Yin-Meridians. It reacts most sensitive to harmful external influences (such as wind). Discords of the lung normally relate to a lack of Yin. 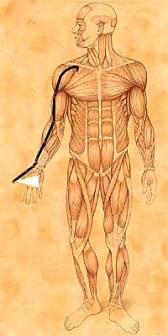 Disturbances of LI are frequently connected with a chronically pathogenic microflora (caused by fermentation of food in the intestines) and/or dysbiosis (altered intestinal flora). Underlying causes are often a disturbance of the acid/alkaline balance of the body, medications (antibiotics, laxatives), wrong diet and food allergies, environmental toxins and psychological stress. Stimulating Li 11 with the Pain-box has a harmonizing and immune-strengthening effect. A dysbiosis of the large intestines can adversely affect Gallbladder and Liver.

Proximity creates an opportunity for immigrants and Greek locals to learn about each other and to dance together for a moment at the festival. We continue through July 11th.

so many travels, so many shows

At the moment, I am preparing to go to Athens for a performance installation with the lovely immigrants I had the pleasure of working with last year. This project will be a collaboration with the participants and Panagiotis Andronikidis. The performance will happen at the entrance of the 15th annual anti-racist festival of Athens on July 9, 10 and 11th. We are still raising money to make this happen.

I am also working on 1:1 please remove shoes for October which will be made possible by chashama and a grant from the LMCC! Hooray institutional support!

two chances next week to catch us

in the new public art alley- Anita’s Way on 42nd St. between 6th and Broadway.

Despina Stamos and Toby Billowitz in Cabbage Salad and blindate every half hour.

at 7:30-8 and again after the Rembetika, Smyrneika and Entehna music performance in  the historic Queens Theater in The Park

as we explore the latest development of 1:1 please remove shoes.

1:1 please remove shoes is an interactive, multi-media performance installation that conjures the visual, the kinetic and while sourcing the experiential- It is conceived as a self sourcing environment where the dance is informed by the space and its inhabitants- spectators influence performers-a self referencing loop inviting the spectator to engage.

An evening of uniquely arranged Rembetika, Smyrneika and Entehna music.

Hope to see you there!

passTRESpass has been a wonderful whirlwind, the marketplace as a space for exchange, learning and listening- I am still reeling from the experience.

our cast grew immensely during our time together- each individual honing their offering until the final performance. their solos brought tears to my eyes. one of our Afghans originally needed to hide in the dark part of the room–he was so shy and suddenly in the performance it was like he was on fire, channeling his story- sharing his escape, expressing what he couldn’t express in words. another dancer- who danced during the Communist regime in Albania learned to improvise a duet with an amazing man from Senegal. each dancer found their way in the score and surprised us with their generosity and commitment. And now we wonder, what is next for them, will they get caught by the bureaucratic broom of the right wing?  Our mobility stands in contrast with their predicaments.

this project was conceived as a collaboration of many artists, activists and community members.

A purpose of the work is to pose questions regarding how we negotiate boundaries on the different levels; human relationships, physical space, and cultural practices. As we are confronted with each other’s cultures, how can we successfully co-exist and flourish? What do we carry with us? What do we leave behind and how does that effect our environment?

Enormous thanks to the Kypseli Market community, the African Womens’ Organization,  Eugenia Tzitzilaki, all the participating artists and all the generous donors who have made this show possible!

Lauretta Macauley – Originally from Sierra Leone, Lauretta left her home and family in order to escape the conditions of deprivation that were present under the single party rule of Siaka Stevens. She has been living in Greece since 1982. Lauretta has worked for many years with elderly Greeks. In 2006 she co-founded the United African Women of Greece, an organization that fights for the rights of African immigrants.

Marie and Fatima Sankoh’s parents escaped conditions in Sierra Leone to provide a decent life for their children. Both girls were born in Athens and excel in school. Officially they are not citizens of Greece or Sierra Leone.

Tapha Diaw,  Doudou Gueye,  Papa Loum and Alphonso Thiaby are from Senegal. Doudou has observed that people from economically deprived countries are called immigrants whereas all others are considered tourists. Papa is in favor of a world with no borders and no papers. Alphonso has been sponsored by a Greek employer. He has lived in Athens for four years and speaks fluent Greek.

Abdoul Houssain Nazari and Mirza Yousefi are from Afganistan. As a child, Abdoul lost his mother when his house was bombed, escaped a massacre, and lived in Iran for 11 years. He’s been separated from his family since his escape . He and Mirza work hard in construction.

Kozeta Myzequari left Albania when the Iron Curtain collapsed, as her economic and social world crumbled. She has lived here for 19 years and her Greek is fluent.

Diarno Sanghott is from Mauritania where about 20% of the population live on less than US$ 1.25 per day. He is interested in integrating into Greek society.

Gloria Strutioth was born here in Greece. Her family is from Albania. She and Marie Sankoh are best friends.

Eddy Waziri is from Tanzania. He believes in equal rights for all people.

Exclusive one-of-a-kind items from various designers: Handbags, Gloves,
Clothes, Jewelry, T-Shirts and other great handmade boutique items.
Great prices, beautiful quality, and most of all you will have fun!
Amazing original (and affordable) gifts!

1st clip from performance 11-10/11-14 at chashama on 37th st,. In this episode, Storme and I, negotiate the small space in the production zone of the garment district, playing with proximity and what technology has added spatially and psychically to the mix.

we land in the production zone. 11/11 is my first leap in. it is armistice day, unfortunately, a yearly ritual on my part–when will we lay down arms? warm arms that hold, support–steel extensions for killing. when did we forget that there was a war to end all wars? when armistice turned to veterans?

we used the arms today

many 4 fingered arms (made in the vicintity)

lots of tape and bandage guaze